For some reason, this Feline Friday brought back a memory of my kitty, "Simon", (As seen in the photo below), and my son when they were both still teenagers. Simon hasn't changed much, and I will never forget the stunts he pulled all of the time, but one particular trick sticks out in my mind. One summer I woke up to find him sitting at my computer. He had the same expression on his face he has in this photo, it's as if he's saying, "What's wrong?"
Simon had been mad at me for months for working on the computer instead of playing with him. You wouldn't believe how many distractions he invented to interrupt my concentration. 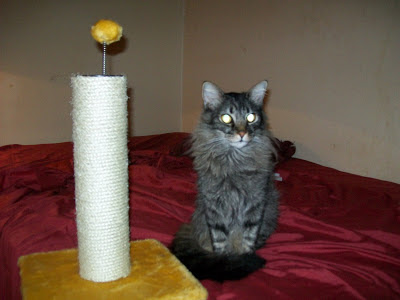 He would jump on the kitchen counter and knock over everything in his way and when I would correct him, he would quickly jump in my computer chair, sit as straight as a board and look at me like the chair belonged to him and he wasn't doing anything wrong. In any event, I tried to trick him one day by ignoring him when he jumped in the chair; I went in the bathroom and started taking a shower instead of checking my e-mail first, but somehow he followed me in the bathroom, which is another no-no for him, but I didn't see him.

I remember smiling and singing in the shower because I thought he was by the door and I was getting a kick out of fooling him. I heard him moaning like someone was dying and I had better come quick, but I continuing shampooing my hair and laughing, that is, until I saw the bathroom rug slide across the floor, and the loudest moan/groan I had ever heard come from an animals mouth. If I didn't know Simon, it would have scared me to death.

I saw little soap bubbles drifting through the air and Simon's silhouette pasted to the shower curtain, but before I could draw the curtain back he was swinging back and forth on it, screaming like someone was trying to kill me behind the curtain. Oh, I was so mad. I held onto the curtain to steady him for fear that the water from the shower was flooding the bathroom, but he kept holding on like he was super glued to the curtain.

I had to physically jump out of the shower and try to pull him off of the curtain, but he crawled over the top of my head and sat there screaming. Somehow, I managed to grab him off my head, dry him off, and get dressed so I could hand him to my son, who was laughing so hard he could hardly contain his composure.

Simon is still quite a menace, so I don't know why I thought of this particular stunt this Feline Friday, but I did and I simply had to share it.

As a warning, not for advice, because although it worked, he has left me alone as far as sitting at the computer ever since, but now, I have to find ways to keep him from following me to the bathroom.

I grew up with dogs and Simon is the first cat I've owned and loved, so it took me awhile to figure out that he is always going to win...always. 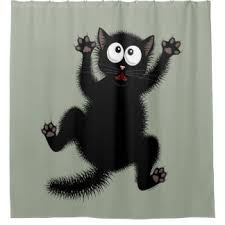 Happy Feline Friday and I hope my post wasn't too long...it was only a warning...Thanks for reading. ;)

And remember, if you would like to participate in Feline Friday, stop by and visit Comedy Plus, post a picture, image, drawing, cartoon, video, (Or warning.) and link up- it's fun. Again, here's the link to the code on Steve's blog, as well as to Sandee's Feline Friday  post.

Thank you for visiting A Nice Place In The Sun! Have a fun day.:)


Posted by aniceplaceinthesun.blogspot.com at 8:56 AM

Oh I love Simon. He's my kind of cat. Who wants a boring cats? Nobody.

Have a purrfect Feline Friday honey. Big hugs to you and tons of scritches to Simon. ♥♥♥

Oh, and he loves you to Sandee. I truly think you're kind of person as well. Boy, you go here fast. For some reason, I couldn't get my sentence structure right or line up the paragraph correctly. I'm glad it's you.

You have a "purrfect" Feline Friday too, buddy.

And "Big hugs" back to you. Plus, pat yourself on the back for being such a great friend. :))

Wishing you great weather today too. :)

Simon sounds like fun heheh! a friend of mine had a huge ginger cat called Simon :-)

Simon sounds like quite a character! Have a great Feline Friday!

what a hilarious cat! Personality and persistence plus!

I haven't had a cat in a very long time but I always enjoyed their antics. It sounds like Simon is a real pistol, funny story

Steve, yep, Simon is a lot of fun, but he'd be more fun if he was tormenting someone else. Only kidding...I don't know why but I love the little troublemaker.

I've heard about a lot of cats named Simon. My son named our Simon after the cartoon character, Simon, on "Simon and the Chipmunks."

Thank you for such a nice comment and for visiting. :)

Have a great evening...sorry for the belated reply.


Hey, Messy, Simon is at that- Thanks for visiting Messy.

Happy Feline Friday to you too! :)

Kathe, Simon would love your comment, and I do too. :)

Thanks for stopping by and have a super great Feline Friday!

Thank you, Ann. Pistol would be a great nickname for Simon. Thank you and thank you for such a nice comment. I'm glad you liked my/his story.

Have a super great evening and week-end. :)))