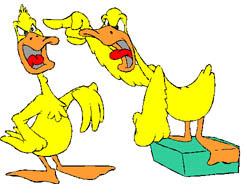 The Louisiana State University campus where I went to school years ago had lakes full of ducks, whose behavior made it clear that they owned the lakes; they marched, waddled and quacked behind whoever had a class near their home making it clear that if you were going to pass their home, you better bring bread.
Us students, could hear duck wings flapping, and a chorus of quacking, before we opened our eyes each morning, including weekends. Perhaps Roosters were born to awaken farmers and Ducks were born to motivate students.
Most of the ducks I passed were polite, but then, I had bread, if you didn't pay your right of passage, you were greeted with the aggressive crowd.
The ducks knew which students were going to feed them, much like a waiter knows a good tipper, but if you expected to pass the pond without gratuity, you were immediately attacked, while the tippers were peacefully surrounded with wing flapping joy.
Incidentally, by the end of their first semester most students knew to leave the house each day with their books, and a bag of bread for the ducks.
Although, students had a lot on their mind, like exams, papers, and whatever else they needed for class, so occasionally a student would forget to bring the ducks food.
Consequently, one student's memory lapse provided a Daddy Duck with an opportunity to teach the rest of us a valuable lesson.
In addition to entertaining the campus with the funniest thing most of us ever witnessed in public; this Daddy Duck reminded us to never step on his property without his family's breakfast.
The morning the Daddy Duck lost his temper, I was sitting by one of the University lakes reading when I overheard a couple arguing in front of a pair of ducks. The voices of the arguing couple and the gander's squawking sounded like an aggressive duck fight; and one loud enough to crack the eardrum of an elephant.
To be fair, this duck family wasn't bothering anyone until the couple came along. They were minding their own business, trying to feed their ducklings breakfast and send them to duckling school when these people showed up and disturbed their morning.
Hence, one could understand why the daddy duck got his feathers in a ruffle over the human couple's apparent rudeness and quickly charged in their direction.
When he approached the couple the man realized he was being challenged, so he put his hands in the air as if he were under arrest, but Mr. Gander was already in hot pursuit.
Everyone around the lake, including me, started laughing as this poor man kept shouting for help and backing away from his attacker. While the rest of the duck family squawked, the guy shouted and raised his fists as if demanding a fair fight from the creature, who continued his advance until he chased the guy down the sidewalk.
Then, later that morning, the weirdest thing happened, I was sitting in a boring history class, (reading a novel,) when I heard squawking again, only this time, I was in a classroom, so the honking, feather flapping argument, must have sounded like rocket fire in the hallway.
The classroom had three hundred theater style seats and two double doors at the entrance, so the students, including me, sitting in the seats near the entrance, could hear someone outside shouting, "Let go of me, ouch, let go of me," followed by more squawking and honking, until the double doors to the classroom blasted open, and the same man was running from the daddy duck I saw earlier that morning.
I was astonished- How was this possible? Had this poor fellow been battling this duck since their war began? Then, instead of rescuing their fellow student, everyone began climbing to the top seats to get away from the dangerous creature; that was doing his best to sink his head low enough to nip the man's heels and balance his wings at the same time.
The man ran up the row of seats with the daddy duck in hot pursuit nipping his ankles... while students were shouting, "Did you forget to give him bread?"
Finally, someone latched onto both man and duck, and the situation came to a screeching, honking, feather flying halt, leaving an entire classroom of students laughing hysterically.
This daddy ducks behavior that morning was one of the most valuable lessons I've ever learned without having to pay a penny or endure a consequence.
And the lesson was; there are strict rules when it comes to ducks; you should always bring bread, and never, interrupt a Daddy ducks, breakfast, lunch, or dinner.