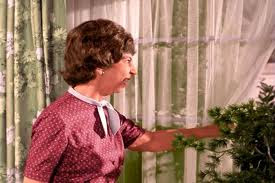 
For one thing, I'm home during the day writing, so that's suspicious, plus, I live alone, another bewilderment, no man in sight, with the exception of a grown son, who hugs me when I meet him in the parking lot when he visits, along with his guitar. I'm sure Glady's gab chatter crowd thinks this young man, is my boyfriend, and he must be married, due to his untimely visits. 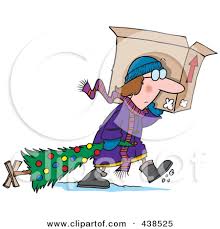 Anyway, I think Glady's is getting to me, 'cause when I started to stuff my fake tree in it's old box, I watched her decorating her tree with Mardi Gras lights.

Then, when our eyes locked, she swished her drapes across her window as if she were pulling the mainsail of a ship.

I do not know why it surprised me, because every store in South Louisiana was stuffing Mardi Gras decorations on their shelves the day after Christmas, and I'm sure Glady's and the "fast talkers,"were among the first in line.  The grocery stores have several fixtures dedicated to King Cakes, Mardi Gras beads, masks, etc...

In any event, I hope I will be able to enjoy Glady's lights because my tree is going back in it's Christmas box. But, on the other hand, I may ask my handsome boyfriend to string some Mardi Gras lights on the outside window.

After all, I have to keep up with Gladys.
Thank you for visiting A Nice Place In The Sun, and be sure to let me know if you enjoyed this post, by commenting, or clicking on Google+

Have a colorful day!

P.S- Now, I'm too tired to take my tree down. Tell me, should I put my Christmas Tree in front of my window? 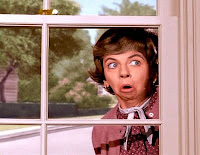 
Posted by aniceplaceinthesun.blogspot.com at 1:14 PM

I see you dumped your on the fence link.Oh well.

Mike, Did I? Oh Mike, I didn't mean too. I'll recheck. I've been working on my other website and making small changes to ANPITS. I'll add it back, I'm sorry, it was an accident. :(

Thanks for letting me know...There are times when I need someone to watch over me. :))))