If You Had A Day To Spend Your Way, How Would You Spend it?

I will post a question for you to answer in comments, then I'll post your answer and link it to your blog.

If you had a free day to spend exactly the way you wanted, what would you do? Let your imagination take you anywhere...or think about your simplest pleasures-

Thank you for stopping by, and I cannot wait to read your answers-  Have fun!
Posted by aniceplaceinthesun.blogspot.com at 12:38 PM 7 comments: 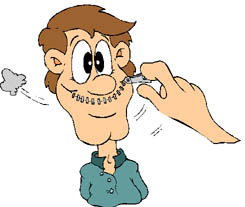 I haven’t been able to sleep lately, so when that happens I jump on my computer and write.  I do not think, I just write…Well, maybe I do think because I could not write if I wasn’t thinking, I suppose.  Hence, last night I started 'thinking' about how people say certain words that aren't part of the English language, over and over again, sometimes for years. For example, I spoke to an old friend the other day, who I haven’t spoken to in years, that used to say the word "majorly" all of the time.

It drove me crazy, but I didn’t want to sound like my mother, and say, “Don’t say that.”  Or “Did you know that majorly is not a word?”  Because, correcting an adult, particularly a friend, would have sounded self-righteous and mean.  Besides, there is nothing wrong with saying a word you like…it is not as if it’s against the law or anything.  Well, I guess you could say it causes mental anguish, but that's beside the point.
Anyway, I was surprised that she still used the same word…and she’s not the only one.  We are all guilty of this malacy…you see, malacy is also not a word, or I do not think it is, well, it may be a synonym for malady, who knows.
My mother is still constantly correcting my words, but she is just as guilty of improper word usage as I am…although she would never admit it.  I don’t know why she is still correcting my language, but I guess she’s trying to make up for lost time, or she’s afraid I may run into one of her friends, and say, “Hello, it’s so nice to see you after all these years.  It’s been a majorly long time, hasn’t it?  “
When I was a teenager, my siblings and I had certain after school responsibilities she demanded we complete by the time she came home from work, or shopping, or riding horses, etc…whatever she was doing.  In any event, my after school duty was to keep our kitchen clean, and I thought it was unfair since I had two older brothers who were constantly in the kitchen dirtying dishes.  I mean, come on, what teenage boy doesn’t spend much of his time staring into the refrigerator?


Anyway, we had better have our chores finished by the time we heard my mother’s white monster car soar up the driveway. (The car’s name was Charger)