A power happy mean girl entered my life on my first day of school. A day I looked forward to for what seemed like years. I watched my brothers from my bedroom window catch the bus, waiting for my day to arrive, and who do I meet the first day, Holly White.

I couldn't understand why other children cried at the bus stop and physically wrestled their parents on their first day of school.
I guess it was due to the fact that I watched my older brothers do it, and they manage to return safely, plus my mother read to us, and I was dying to learn how to read; I guess I was a weird kid.

I remember feeling overjoyed when I climbed the stairs on the school bus for the first time. My brother was instructed to walk me to my classroom, but of course he didn't, which was fine with me, because I was a big girl full of courage, that is until the bell rang, and I started crying and roaming around the school trying to find my classroom.

Then, a miracle happened, another student was also lost and she was with her mother, her name was Holly White, and from that moment on we were joined at the hip. We learned to read and write together, and spent every free moment talking about everything we knew about the world. 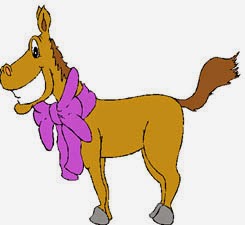 We went to all of the same birthday parties, joined brownies together, etc...Holly was one of the popular girls that every female first grader wanted to be associate with, or even join for lunch, and I was her side kick, wing girl, and slave.

For some reason, I didn't feel like I was likeable as myself, so I bragged about the one thing that most children went crazy over- My parents owned a boarding stables, taught riding lessons, and brought most of their boarders to horse shows, so the horses they owned as well as the other horses at our barn were not for children to ride. But, I had a Shetland pony we could ride, and I couldn't wait to tell Holly.


Well, naturally I thought Holly would be delighted to visit our barn, and impressed enough to maybe spend the night. So, one afternoon at recess, I mustered the courage to invite her using my parents stable as bait.

I remember what happened next like it was yesterday;

Holly and I were looking for a four leaf clover at recess, when I said,

"Holly, would you like to ride the bus home with me tomorrow? Every afternoon after school I ride with my mother to our barn. I have a Shetland pony, and we also have horses you can brush and sit on."

Holly's stopped looking through the clover, paused, fixed her dark brown eyes on mine as if she were my enemy, and replied,

Stunned, I began to think as fast as I pulled clover, and said, "Well, we also have chickens, dogs, cats, and a bunch of other animals. What kind of animals do you like?"

Holly thought for a moment, which seemed like a year, and said,

Delighted, by the prospect of having a queen ride home with me on the bus, I said,

"Oh yes, we have lots of pigs, and we even have a pond for them to play in- When would you like to visit?"

"What about tomorrow?" Holly said. And of course I agreed, although I wasn't sure my mother would, especially on short notice, so I spent the rest of the afternoon practicing how to ask my mother. I felt like tiny slivers of ice were running through my bloodstream the rest of the day.

But, to my surprise, my mother said yes, and after a nights sleep, my day came to impress our school celebrity.

When my mother, Holly, and I arrived at our barn, Holly was amazed and impressed, even with the horses.

Then, she was ready to see the pigs at play in their pond.-

The pond was far back in the pasture, so Holly and I kept walking until the barn was out of sight.

Then, it happened, my mother started calling my name, "Ann, Ann, where in the world are you going?"

But, before I could answer, Holly said, "We're going to see the pigs!"

I felt as if I was melting, when my mother replied,

"Ann, we don't have any pigs! Now, come back to the barn this instant." 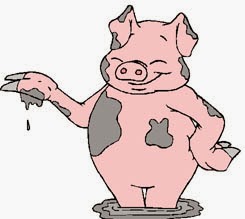 -Today, I suspect Holly knew we didn't have any pigs, because she felt she would lose her power if she admitted she was impressed.  I like to write stories of the mistakes I made growing up because we all make the same ones. All of us have to deal with mean girls and boys- It seems to be one of the recipes of life. And this was my first one. I wonder where Holly White is today, and what kind of person she turned out to be. I bet she is a nice person today. Thanks for reading such a long story, I hope you enjoyed it-   Ann Clemmons


Posted by aniceplaceinthesun.blogspot.com at 12:02 PM

Well, this was delightful Annie. What a wonderful childhood memory. I'm sure that she is as nice now and she was then.

Have a wonderful day my friend. Big hugs and tons of love. :)

It was one of those memories you never forget.

I use many of my own lessons in manuscripts or articles.

Thank you for reading such a long story. I love ya- and I appreciate your friendship and support.

Have a great day full of blue skies and fun.

Big hug back to you-