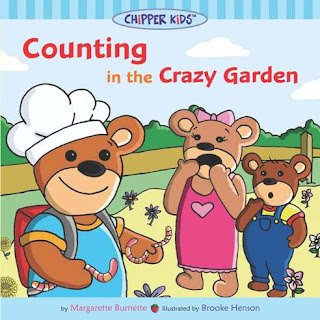 “One Jiggly, wiggly, wobbly worm cobbler” sounded great to Arnold Chipper, the creative and organized teddy bear gardener. However, the zealot chef had trouble convincing his curious but reluctant sister Maria and friend Albert to try his dishes. Not because the recipes were from the garden, but because the ingredients were the dirt, grass, pine needles and other creatures Arnold found outside.

Chipper Kids-Counting in the Crazy Garden is a counting by numbers book (one to ten) although it reads more like a story- The book begins on a single page with Arnold Chipper stirring from a bowl of what looks like mud, although the first page is not counted.

The counting begins on the first two-page spread with the number One in the top left corner. The page with the number in the corner has as illustration of the same number of recipes Arnold creates… a counting style that continues throughout the story- For example, on the first two-page spread we see an illustration of “One jiggly, wiggly, wobbly worm cobbler, ” on the left page with the numerical number one on the top of the page.


Margarette Burnette’s fun characters and active prose nicely accommodate Brooke Henson’s expressive illustrations, creating a happy mood for the story. All Arnold needs for his dream to create goodies from his own garden to come true is a little information. The first two- page spread has an illustration of “One jiggly, wiggly, wobbly worm cobbler” with the number one in the top left corner of the page. However, the right page illustrates Arnold with his baking hat offering his brother Albert some “wiggly, wobbly worm cobbler,” but of course, Albert says, “No way” disgusted by the thought of eating worms from the dirt...

The second two pages are full of colorful illustrations of Arnold happily stirring a recipe with his sister and friend in his Garden. His sister Maria and Albert are interested in what Arnold is making throughout the book-, which is hilarious. The second two pages (or the third two- page spread) the numeral Two is boldly printed in the left corner of the page, as it was with Arnold’s worm cobbler and an illustration of “Two tall tubs of tumbleweed soup” are displayed- Albert and Maria’s reaction is across from the illustration of the two cans on the next page. Children will laugh at Arnold’s concoctions, while learning to recognize and count numbers as they participate in counting Arnold's feasts.

The text is not preachy or patronizing and the characters are lovable- You cannot help but love Arnold whose perseverance and love for his garden are evident throughout the story. Arnold’s charm will have children requesting a page turn, anxious to know the outcome of what Arnold will cook next, in addition to counting along curious to see how much of it he will make. You begin to hope for Arnold as his sister and friend look out the window wondering what to do, until... I’m sorry, I can’t tell you what happens next...

You will have to see by getting a copy for yourself, and your children... Arnold will not only interest your children in counting and gardening, he will help parents teach their kids about healthy food and where it comes from-

“When she’s not blogging, Burnette is a health and parenting writer. Her articles have appeared in Parenting, Pregnancy, Essence and several regional parenting publications.

“She lives outside of Atlanta , Georgia, with her husband and two children, ages four and six. “ .

“Burnette blogs about her experiences at www.ChpperKids.com a web site that also offers free games, and coloring books for kids.”

Posted by aniceplaceinthesun.blogspot.com at 5:11 AM

Worm Cobbler, fresh from the oven, just like mom used to make.

You sure bring back the memories.

Who said these were memories Brent?

What a wonderful book. My grandaughter is just getting to the age where storytime will be part of her life ... looking forward to that very much. She learned to say "gramp" last week!

I saw your comment today, and will be back Ann. Off to work for me in an hour - "I do not like working weekends nor green eggs and ham, SpeedyCat I am..."

I think my littlest boy (age 3) would love this book! Thanks for the great review Ann. :-)