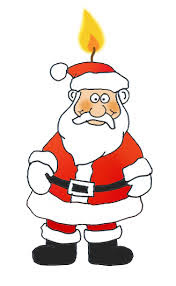 When I was a little girl I wondered why Santa Claus was better looking in some photographs and paintings.

Anyway, I don’t have to worry about that anymore, because I’m a grown-up now, and I know why Santa is better looking sometimes. In any event, I haven’t thought about my Santa observation in years (a lie) until I was asked to post an essay about Santa. The title was, "What Was the Funniest or Worst Christmas Gift You Ever Received?"

At first, I wasn’t sure what the funniest or worst gift I ever received was, because the worst, funniest, and the best present I ever received for Christmas happened to be the same gift; a candle with a bad looking Santa painted on the front. - it was a gift wrapped with good intentions -- a gag gift.

The Santa on this candle had a face that resembled an elf. His hair was tucked behind his ears and his facial features were piled in the middle of his face, so to be honest, I wasn’t sure if the candle was supposed to be Santa Claus. I mean... it wasn’t because he had ears, everyone has ears, but you usually do not see Santa’s ears.

Plus, this Santa candle's wick ran through the top of his hat. The candle-maker must have been thinking about what he was going to have for dinner that evening because it is hard for me to believe that he would reduce Santa Claus to a blob of red and green candle wax.

The Christmas Candle was a present from an employee in the department I managed in a Department store. We drew names for gifts and out of all the managers’ names she could have drawn, she drew mine, which under ordinary circumstances wouldn’t have been a bad thing, but she picked my name two short weeks after our relationship started down a rocky road, but that’s another story.

Let’s just say I wasn’t surprised when I opened my gift from her and saw that it was a candle with a painting of a bad looking Santa Claus. I couldn't help but wonder if she purposely found the worst gift she  could stuff in her purse before the security officer at Walgreen’s could catch her bolting across the parking lot.

To make a long story short, I brought the candle to my grandmothers for Christmas one year and somehow, she misunderstood it to be her gift. I think it was because my grandmother received so many gifts it didn’t occur to her that Santa was meant to be a decoration.

In any event, she pretended to love it as other family members placed presents in her lap. I tried to tell her, but before I could, she said, “I love your gift honey, and I’m happy you remember that "It’s the thought that counts.”


Well, that "thought counted" into the following year when my grandmother wrapped a twenty-dollar bill around the squashed faced Santa and gave him back to me.

At first, I wasn't sure if she remembered that I gave it to her the year before, but then,  the Santa candle became the gift that kept on giving. My grandmother and I traded him back and forth for years, and no one in my family ever noticed.  It was our little secret.

In closing, I'm left with two questions; how did my grandmother and I keep a straight face and how did we keep Santa alive through so many Louisiana summers? I put the Santa candle in my freezer when he was under my jurisdiction, and I suppose she did the same, although it still amazes me how long we got away with it before anyone ever noticed.

Finally, after about six years, when I unwrapped the candle, my mother smiled and said,

"I'm tired of that candle."

But, my grandmother and I couldn't stop, and we were both afraid that Santa might melt on our watch.

My Christmas employee gave me one of the best and funniest Christmas gifts I ever received.  A gift my grandmother and I wrapped with love for many years. By the time my mother noticed our gift exchange Santa looked much like our American presidents when they leave office. 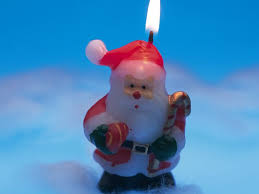 Thank you for reading and visiting A Nice Place In The Sun and I wish you a very merry Christmas  this year. :))))

Posted by aniceplaceinthesun.blogspot.com at 6:08 PM

What a delightful Christmas tradition.

How fun and what a lovely memory of your grandmother. Grandmothers rock and then some. I sure had a good one.

Have a fabulous day honey. Big hug to you and lots of scritches to Simon. ♥♥♥

I still believe in Santa Claus. Santa is a spirit that will never die in my heart to the day I die. My grandchildren love the fact that grandpa still believes. I wish others would think the same way.
Merry Christmas my friend.