If Doors Could Talk 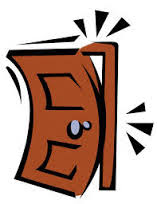 When my family visited my maternal grandmother during the springtime, we sat on her screened in front porch before the onset of a sweltering Louisiana summer, at which time we visited inside with the air conditioner. The view of her front yard from the porch in the spring and autumn months was intoxicating. You felt as if you were sitting inside a bouquet of untouched flowers beneath a pristine airy sky.
The house was in the center of the yard, which was surrounded by azalea bushes, petunias, and moss sheltered trees, so the heat wasn’t the only reason we sat on the front porch instead of going in the house, it was because we couldn’t resist being outside.


The front porch had two front doors, one for humans and a door my grandmother had built at the  bottom of the front porch window for her beloved German shepherd, “Sam,” whose door remained swinging from the top hinges after his death. I loved to enter the porch through Sam’s door and of course, play with it although my grandmother prohibited it.  Sam’s door was built for Sam and when a hinge broke or the wood cracked, she had it fixed, she never removed the door.

Both of the front screen doors had their own stories and secrets, if only doors could talk. For example, my brothers and I could judge the mood of the “grown-ups” in my family by the way they closed the screen door on their way in or out, so again, both porch doors played a role in my family and both had character.
For example, there was an art to closing the front porch door, it didn’t close easily, so if you didn’t pull the knob gently, it would bounce against the door frame, which infuriated my grandmother.
One day I pulled the door too hard and it ricocheted against the frame then stopped leaving the door open about six inches. The house grew silent and I stood as straight as a soldier anticipating the expression on my grandmothers’ face. But, her hazel eyes met mine, and she said,

“Ann, I can see you were in a hurry, but you left the door open again, now go and close it.”
My brothers and I called my grandmother, “Nana,” so I said,

“Nana, why do you get mad when the porch door doesn’t close, I mean, we’re outside?”

I watched her eyes while she searched her mind for an answer, then, she looked at me with a perplexed look, as if she was asking herself the same question. She continued to look at me, then smiled and said,

“Because it lets the air out. “

In closing, over the years, I’ve wondered what she was thinking before she answered me and I'd like to believe she was thinking of her yard. Perhaps, she didn’t want the air inside the porch to blend with her Azalea bushes, moss sheltered trees, and a bouquet of untouched flowers beneath the limitless sky.


Although, I think the truth is, she didn't want to ruin a perfect day and was probably relieved that I didn't break the front porch door, a fact that never occurred to me when I was a child. In fact, now, I also understand why we weren't allowed to play with Sam's door and why it took her so long to answer my question, in addition to why her answer didn't make any sense.

Thank you for reading and for stopping by A Nice Place In The Sun. I hate to miss Aww...Monday's a weekly meme from my friend Sandee's blog, Comedy Plus, but I've been thinking about my grandmother lately, then last night I thought of her and the porch doors in the middle of the night, and I just had to write it down. But, I will certainly return to Aww...Monday's next week and I encourage you to stop by Comedy Plus and link up to Aww...Monday's  link list, it's a lot of fun.


Have a fabulous day and a great week. And again, thanks for visiting. :))

Posted by aniceplaceinthesun.blogspot.com at 5:58 AM

Awww, what lovely memories indeed. You made me think of my grandmother. Grandmothers are so very special.

Have a terrific Awww Monday honey. Big hug to you and lots of scritches to Simon. ♥♥♥


Hey you, Yes, they are. I have been awake since that memory woke me up at 3:00 am. I cannot imagine how many mistakes I made, but Sandee, the words just came pouring out.

I'm glad I made you think of your grandmother and you have a terrific Awww Monday too. I really do enjoy posting Awww Mondays posts and I'm sorry I missed it today.

The photo you posted was so, so adorable I'm still thinking about it.

"Big hugs" back to you and I will send Simon his "scritches." Thank you for thinking about him. :))))

thanks for sharing your tales with Grandma!


Kathe, Thank you for reading it and for such a kind comment. I'm sorry for my belated reply. I have been neglecting my blog lately due to too much work! So, I hope you read this....:(

If you are reading this have super great day, and thank you again.


Thank you, Ann, and thank you for reading it and taking the time to comment. I've neglected my blog so much I didn't expect many comments, so please forgive me for writing a belated reply.