If I was a Handywoman, I wouldn't need a Handyman 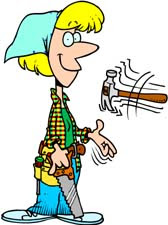 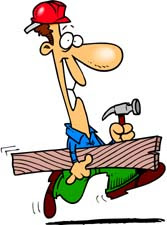 If I was a Handy woman, I would not need a Handyman. Nope, I would be fine and dandy Annie- And my slogan would read, "No job too large or too small- Handy Dandy Annie will conquer them all." That is my new dream folks...

Because after I climbed over my cat and out of my bed this morning...my bedroom door fell off the hedges, trapped my foot, and laid against me like a bad dancer. I tried to pry the piece of junk off my foot, but I was fighting a losing battle- I felt like the cat wrapped in the arms of the cartoon skunk Pepe Le Pew. Then, after the door was finished swinging me around in romantic bless, it tossed me to the floor like a piece of discarded linen.

Consequently, I forgot it was Tuesday, which means I was supposed to have posted Tuesday’s Question this morning. I really did forget… I’m not kidding...just ask Eric at SpeedcatHollydalePage, because I left evidence in his comments shortly after I awoke to my drama.


Hence, it might be a good idea to get back on track and post the next Tuesday’s Question next Tuesday. I’m sorry you’re reading about the postponement so late in the afternoon.

I’ve been meaning to write you about it all morning, but as you now know, it was an impossibility at the time. Although, it would not have been a problem for a Handy Woman- that door would not have danced around with her all day, no sirree.

But, I'm not a handy woman and I've been working on a new line up of weekly posts, so I need to post a blog calendar. That way, I'll know the day of the week, and you can see what's coming next...from this oh so predictable writer/blogger...

Anyway, I have to go now so that I can write what you will read tomorrow. I have a new weekly post for us to do on Wednesdays...unless the roof caves in...


Oh, and don't forget to vote for me for Humor Blogger of the year over at HumorBloggers.com before they realize A Nice Place In The Sun has been nominated.

Here's the direct link, you do not have to be a member to vote...Thank you a million times.

Posted by aniceplaceinthesun.blogspot.com at 4:41 PM

Okay, I'll await Tuesdays question. I also voted for you. Have a great day. Big hug and lotsa lovies. :)

Thank you Sandee. You're definitely my greatest supporter and one of my favorite people. Do you know that you have answered just about every Tuesday's Question? I wish I could do something just for you.

Because you're the poster girl and a true Quiz Whiz Award winner. You will most definitely get the first t-shirt. (Whenever I make them)

You're a special friend.

Big hug and lotsa lovies back to you~

And thanks for awaiting Tuesday's Question.

Ann ... You are one of the sweetest bloggers I know. I say that with all sincerity.

I get confused all the time, and especially with blogging. My philosophy is that a blog is FUN. I never have made an attempt to make money, nor gain millions of readers ... I simply like the creativity and meeting fine people like yourself.

Sometimes I miss coming here on Tuesdays because I forget what day it is, or maybe I get sidetracked. Yhat happens easily "on my computer".

I will always be a fan of your blog, and will be here NEXT Tuesday.

Oh dear...this happened to me last week at the office. I propped the door open with something. When I went to close it, the whole GLASS door fell on me. Thankfully hubby was there and he helped to get it back up. I don't know what I would have done if he had not been there.

I voted for you. Good luck!

Just to make sure you know, I have my "Quiz Whiz" badge up at "my place!"

Thanks again and good luck with the handy(wo)man projects!

Annie, I hope you beat that door's ass for daring to attack you. That is what a real (handy) man would have done. Ha ha. Love you honey!

vote for you Annie? why of course

I would do anything for you honey and as far as waiting for a Tuesday post...I'm here everyday anyway.

I think YOUR the sweetest and greatest...mostly we don't even need men (sorry speedy) but then something like that happens and you have an aha moment...oh yeah...
that's why he's here...(laughing)

Okie Dokie I too am in waiting. I voted for you too!!

Thanks Annie, that was so sweet of you to say.

If you were a handywoman you would make Joe the handyman jealous, at least that's what Sarah Paline would probably say.

Why not be a handywoman! I think women are more handy in the real life than men and some of these men call themselves handy! :)

and if you were a carpenter and I were your lady...would you marry me anyway...I'd have your baby...ever since I saw the name of this I have been singing that song....how are you?

Hi Annie,
The red badge looks good. I came to the conclusion that one size, or one color, does not fit all.

BTW, I am shooting for a 1/1/09 launch date. There is still a lot to do.....I hope I make it. Also, I will be giving my home page a complete face-lift, hopefully this weekend.

Thanks for being such and ardent supporter.

A handy woman sounds so cool..! I always loved rough and tough women..!and woman can very well be handy..!