A Disobedient Chicken With Attitude 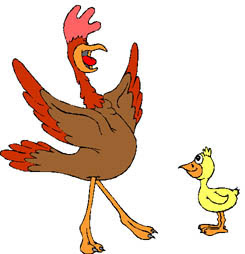 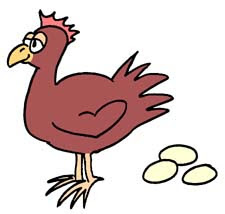 This little One On The Egg Carton Is My Chicken Choice 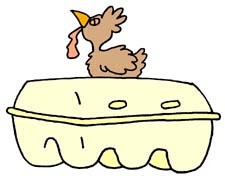 Here is my chicken for Speedcat Hollydale's wordless chicken Tuesday. I found the others too , but I don't like them, they lack character. (Please don't let this be the day when someone I'm trying to impress stops to read my page.) Anyway, I guess most chickens lack character, they're always too chicken to stick up for a friend, or admit when they're wrong, in addition, they're either clucking and ducking an issue or bossing each other around... I suppose that's why we started wringing their necks in the first place. But, I do like chickens with an attitude, and this little chicken on the egg cartoon's display of civil disobedience is my kind of chicken.

Do you think I made the right choice? I mean the little chicken on the egg carton is a rebel, which suggests brains, and well look at the other poultry? One is ignoring her eggs and the other looks as if she is lecturing her little blank faced chick with a two word vocabulary ...

His name is Fog Horn Leg Horn isn't it? Because after this post, I may need to look up the creator or producers of the show and see if they need any writers !
Posted by aniceplaceinthesun.blogspot.com at 4:53 AM

Wordless Chicken? Okay. I'll have to go look at his post too. I like your chicken just fine. Bwahahahahah. :)

Sandee, I'm glad you like my chicken. I do think he/she is the best one. Did you see Speedy's page? LOL I think we're all going to end up in a chuckle house one day, I really do, I just hope it's the same one.
And that they let me bring my chicken.

Misty Dawn, Yep, You're probably going with us- to the chuckle house I mean. (LOL) Thanks for the visit~

Yes Ann I have to agree with you. You made the correct pick.

Boy Eric has got all of us in the chicken house.

I hope we're not headed to the nut house next..LOL!!!
Hugs,
~Jackie

Jackie, You too huh? I'm going to have to go back by to his blog and see who else he has enlisted. The last time I went by he did have a long list. Oh, you know I just realized I didn't link to his post. Geez... I think I'll get to the nut house before any of you. Although, I'm glad to see that you'll be joining Sandee, Misty and the rest of us. (LOL) Have a great day Jackie.

Ann!! I'm not sure if I laughed more from the post or from the comments ... mostly BOTH :-)

You don't have to link back to me for Chicken Tuesday, it's just a for fun thing - and that it has been. This simple crazy idea will probably be my single favorite for some time.

So far, you have the most creative post, I KNEW IT! Thanks for taking part - I have a feeling that "Speedcat" will = CHICKEN for some time to come.

Off to put your post up in lights on the BIG BOARD of POULTRY!!

I like the little chicken on the egg carton best too. she has a statement to make, but since this is "wordless" chicken I guess we'll never know what it is!

I like the one you chose Ann... too cute!

I agree ...that chick is going to be one independent chicken...
very funny Ann :)

I saw this was on your sidebar Ann ... had to come see one more time!

Hi Ann, you will never guess whar song is on my mind today :-)

We were doing the "Hustle" at my dance party (blogwise).

Miss U
Hope you are alright

It's really funny chicken.wordless chicken is awesome.It's really looking disobedient.As it's shows away from her eggs.

This can't succeed in reality, that is what I think.
Used Cars Buffalo NY | Moving Boxes NYC | emergency dentist newmarket

I'm glad you like Levitra Online my chicken. I do think he/she is the best one. Did you see Speedy's page? LOL I kamagra uk think we're all going to end up in a chuckle house one day, I really do, I just hope Phentermine 37.5 it's the same one.
And that they let me bring my chicken.

I suppose http://20poundsamonth.com that's why we started wringing their http://fightextraweight.com necks in the first place. But, I do like chickens with an attitude, and this little chicken http:// fightfatusa.com on the egg cartoon's display of civil disobedience is my kind of chicken.