What's Behind A Smile? Is It Real Or Fake? 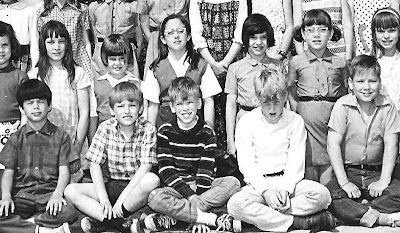 Can you tell the difference between a real and fake smile? And what's going on in the mind of a person when they're smiling?
While sitting at a reading table in the children's department of Barnes and Noble yesterday, I noticed an employee watching me out of the corner of her eye.

She acted as if she had to keep an eye on me, because I had plans to rob the place, and had a getaway driver in the parking lot. Then she walked over to where I was sitting, flashed a fake smile, and began to wipe the table. There was something about this employees fake smile that made me think of my third grade teacher Miss Keysler, and the picture I posted the other day. I was surprised at how kind and sweet Miss Keysler looked in the photo. The picture reflected a different Miss Keysler than I remembered. Was my memory playing tricks on me?

I couldn’t tell whether Miss Keysler’s smile was fake or genuine, although when I got home and magnified the picture, there was no doubt, it's genuine. I guess my ten-year-old perception of her was off, especially since she made me stand in the back of the classroom after I blew Dexter’s whistle. Incidentally, I left Barnes and Noble, and gave up reading Puff the Magic Dragon, after a few more fake smiles from Miss Thundercloud. I thought about Miss Keysler’s smile in my car on the way home. What was I picking up about Miss Keysler from her body language and smile in person, that wasn’t reflected in the picture? What I mean to say is, her smile in the picture is a reflection of how she was feeling or thinking when that picture was taken. Therefore, our smiles are a reflection of how we are feeling and thinking inside but not necessarily saying aloud. I guess that’s what they mean by a photographers eye or insight into the perfect moment or camera angle. According to the BBC Science and Nature web site I looked up when I got home, most people cannot distinguish between a fake and genuine smile. The web sites article states; “it may be easier for people too get along if they don’t know how others are feeling,” so maybe that's why people can't readily tell the difference between a fake or real grin. I read this in the article posted after a test to see how well developed your fake and genuine smile radar works, entitled Spot The Fake Smile. I scored 16 out of twenty, which I think is good. Therefore, I think that many people can tell when a smile is fake or genuine.

The BBC Science and Nature web site gives clues on how to distinguish between a real smile opposed to a fake one, in addition to suggesting that our subconscious and conscious mind play a key role. Here is their suggestion:

“Fake smiles can be performed at will, because the brain signals that create them come from the conscious part of the brain and prompt the zygomaticus major muscles in the cheeks to contract.Genuine smiles, on the other hand, are generated by the unconscious brain, so are automatic. When people feel pleasure, signals pass through the part of the brain that processes emotion.”

I thought of this passage when I zoomed in on my classmates smiles...
When I copied the picture the other day I didn't notice their expressions, so I didn’t remember the other children as well as I did when I zoomed in on their faces. It's as if they were stuck somewhere in my sub-conscious...

You can tell our personalities by the look on our faces, or how we may have been feeling that day. I know you can find the mean girl and Dexter looks angry doesn't he? And me, I look like the sun's in my eyes, but none of our faces look fake. If anything, they just look like we all want to go to recess, with the exception of Miss Keysler, of course...although on second hand... she probably wanted to go to recess more than we did.

In closing how well can you judge a fake or genuine smile? Here’s the link to the test, let me know how you do, o.k.? Remember if someone smiles at you quickly it's probably fake, whereas if it's spontaneous it's real, I think. Take this test it's really cool. I can't wait to see how you do. Thanks for reading, and have fun!

Posted by aniceplaceinthesun.blogspot.com at 6:20 AM

Email ThisBlogThis!Share to TwitterShare to FacebookShare to Pinterest
Labels: Memories

It's easy to pick out a fake smile in person, a little harder in a photo. You should have told that B&N employee that she had spinach stuck in her teeth and then flashed a fake smile.

It is harder to tell in a photo isn't it? (LOL)Although, no one in these photos is attempting to smile. LOL. You ought to try the test out, it's really weird. Laugh. I'll visit operation mom. Thanks for stopping by, and I'll try your advice upon my return to Barnes and Noble. Spinach in her teeth, lol. Good one~

Anonymous, I love it too, and I replayed for you. ;)

I scored 14 out of 20, isn't that sad, lol. Don't let the fake people bother you, the same sort of thing happened to me the other day, I was in the dollar store and this one lady wouldn't stop staring at me. Except I didn't even get a fake smile. I'm convinced it's some sort of good and bad energy thing (don't ask) LoL.

Anyway I'm going to email you soon, I got your email last night. I've been really busy today, I've got tons to tell you ~ We'll talk soon.

I think even on a photo you can spot one. on these photo's too.
Oh and if you rob the store could you please get some chocolate for me. Thanks

Christy, I know what you mean about that site. I have an addiction to it too. Can you tell? There are so many fun web sites out there right now. By the way, I think you have a good score. Wasn't that test weird? I mean some of those smiles are downright scary. I'm glad you got my e-mail. I'm dying to talk to you.

Thanks for reading and the great comment, Christy
Hugs, Ann

Marja, LOL For you anything! I will be more than happy to get some chocolate on my next time out! ;) Thank you for saying you can tell by a picture too. You're the greatest~