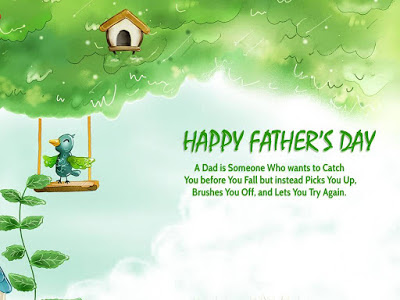 Happy Father's Day to every Dad who has changed a diaper, rocked his child to sleep, read to his children stories. Happy Fathers Day to all of you fabulous Dads!

This is your day and I hope it's a marvelous one!

I wrote the following story for my father, so feel free to leave a comment about your Dad or about any of the great days you know.


When I was a small child, I rested my head on my bedroom window sill at bedtime waiting for his car to pull into our driveway.  Most of the time I fell asleep, but occasionally I could hear his Cowboy boots crinkle when he stepped on the concrete steps leading to our front door. My father’s job was dangerous so I was afraid he would not return if I went to sleep. I remember struggling to keep my eyes open for what seemed like years to ensure his safe return.

The times I was awake at my window when he came home the pace of my heart quickened with excitement followed by relief.
Sometimes, I wondered if he was my father or an impostor, I’m not sure why, but probably because I didn’t see him often. To me, he was an untouchable hero-  I can still see him in my mind’s eye, his black curly hair, greenish blue eyes, cowboy belt buckle, and of course, his boots. 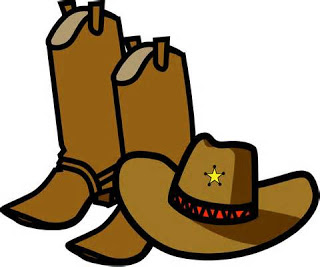 My father was a Captain at the Sheriff's Office in our city for thirty years, although it was not his chosen profession. My Dad was a policeman because he had three children to feed, my oldest brother, followed by my middle brother, and me, the youngest.

He wanted to train horses, so my parents moved to a ranch in the country until they discovered my brother had Asthma and they needed to be closer to hospitals and doctors. This is a story I’ve been told and believe to be true, although my father has never mentioned his dreams, and never complained about the sacrifices or choices he made, he just did the right thing.

I also realize that heroes never leave and my hero will remain close to my heart, mind, and soul throughout my lifetime.  Every time I see a man wearing Cowboy boots I think of my father.-Who wore his boots in a suit. -  Except now, he is a professional fisherman and wears tennis shoes most of the time, so I suppose he is now a cowboy/deep sea fisherman.

My father didn't know what to do with children, but he made a lot of sacrifices to keep us warm during the winter and cool during long hot summers. He loved us and as I grow older I realize that love is the most important gift anyone can give.

My Dad isn’t perfect, but I have never doubted his affection. Well, that’s not totally true, there were times when I wondered if he forgot about me, but deep down I knew he would never turn his back on me. Even to this day, my son and father make me feel less alone in the world.

My father taught his children character by example. For instance, I know he will always do the right thing, keep his word and that he has a loyal loving heart.- I’m lucky to be his daughter.-

I love you, Daddy.

And by the way, catch me a lot of fish!

Thank you for visiting A Nice Place In The Sun!

Have a fabulous day!
Posted by aniceplaceinthesun.blogspot.com at 11:58 AM

What a nice tribute to your father. You had a rough go of it it seems. It's hard when divorce is thrown in the mix.

My father was a tyrant, so we'll just leave it at that. No happy fathers day from me.

Have a fabulous day. ☺


Yeah, it sounds like you didn't have an easy time of it yourself. Thank you for writing it was a nice tribute. It is really hard when you have never felt like "Daddy's Little Girl," which I think is a myth anyway.

But, you know, I think we turned out pretty well, don't you? I am sorry your father was a tyrant. But, in spite of him, you turned out to be such a kind, smart, great lady, and I mean that with all my heart.

And you have a fabulous day too!

Nice post..!Thank you for posting this blog.
gclub
โกลเด้นสล็อต
gclub

THANK YOU! I appreciate you for visiting and for writing a comment. I hope you will return and when I figure out how to translate your website, I will visit your blog. I would like to read it as well.

Thank you, again, and it is nice to meet you.

Thanks for share the most useful information. I also share the topic Google Play Gift Card codes. For more detail visit my blog

Thanks for sharing. Great post! I am share my experience in my blog for more detail visit free Robux


Hello, the whole thing is going nicely here and ofcourse every onne is
sharing facts, that’s genuinely good, keep up writing.
some people want to find
free dating for free sex and some people find
free sex partner near me but
find free sex partner is also an option and
dating sex partneris also a good option for you.
free live sex is a golden opportunity to find someone special.
live sex and
live sex dating aap is another best option for
free sex dating near you. just check it.