A Book Review: The Boogeyman From Planet Lackawanna 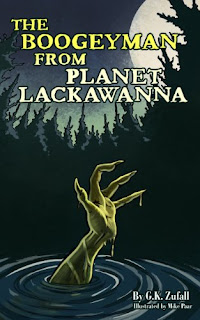 When I read the first line of the book, The Boogeyman From Planet Lackawanna, my pulse quickened, it read:

“As I sped through the dark forest, my heavy sword grew weightless. The sound of footsteps came up behind me and my sword swung into action, but nothing was there. “

After reading this line you are drawn into the nebulous world of an eleven year old child, who is on the verge of entering an unknown world. - The world of thirteen year old teenagers. –

Chapter one invites you into an exciting, mysterious, enticing atmosphere charged with emotional undertones; you are lead into a place remembered, a time in which adults and pre-teens, for which the story is written, can certainly relate.

You have the feeling that someone is watching you read the prose from the beginning to the end of the book, which is narrated by Theo Wilson, the protagonist, and written from his point of view. Theo is an imaginative, loyal friend, in addition to an independent thinker with an inquisitive mind. He is a risk-taker when it comes to doing the right thing, especially when it involves people he loves.

Theo’s character, as well as, the rest of Theo’s colorful, warm, hot, loving, and charming friends, family and acquaintances are true to life, so true, that you the feel you have met them before.
Even, the green blooded, stinky, mean Boogeyman, is factual, in his own way. Theo has seen the Boogeyman in his dreams and feels as though something “strange” is happening in the woods behind his house.

Theo enlists the help of his closest friends, Pete and Enrico to get to the bottom of this frightening mystery, which is deepened by the knowledge that the cool kid, Jerry Bacon, who is days away from his thirteenth birthday, and usually doesn’t acknowledge Theo's existance, suddenly approaches him.

Jerry is uncharacteristically kind to Theo, in fact, he warns him to stay out of the woods, and this is after Theo heard Jerry talking to someone in the woods behind his house.

And the investigation begins, holding the reader in its embrace from start to finish…

I highly recommend this book to everyone, but especially to parents, teachers, friends and family members who know a pre-teen or teenagers.  This is book is more than a scary story, it broadens the genre of horror, mystery, fantasy, or science fiction, due to the authors intuitive insight and sensitivity to characterization.

A brilliant read, definitely one of the best!

Available on Amazon.com, Kindle e-books and Kindle store.
Posted by aniceplaceinthesun.blogspot.com at 11:07 AM