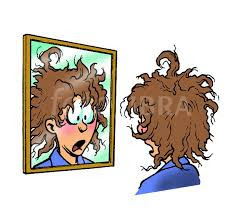 I woke up this morning traumatized by my reflection in the mirror. Everything about my face is the same, but my hair is a different color. I have the beginning of old lady hair- Well actually, a few silver grays mixed with a multitude of blonde colors or dark blonde, or what some people refer to as "dirty blond,"- The latter being one of my favorite descriptions for light brown hair.-

Anyway, after I blocked my reflection out of my mind, I stepped into the shower, and started singing,

" I'm Gonna Wash That Man Right Outta Of My Hair", from the movie classic, South Pacific, thinking of an ancient relationship.

Because, for some reason, I think of my ex-husband, when I hear that song. (Hmm, I wonder why?)

I think the tune was dancing around in my subconscious, until the water blasting through the shower cleared my head.


Although, I was still dreamy enough to imagine my ex-husband swirl down the bathtub drain. The thought of simply "Washing Him Outta Of My Hair," thrilled me.

So much so, that I considered other song titles that would work well, like, "I'm Gonna Cram That Man Down The Tub Drain," or "Toss His Bags Right Out The Front Door."


In addition, I contemplated how joyful it would be to have magical powers, like the character, Samantha Stevens, (Elizabeth Montgomery) on Bewitched, a television series in the sixties. (By the way, I was a baby/child at the time.)

I thought of Endora when I stepped out of the shower, and dreamed I was a witch, overjoyed my the thought of downsizing my ex-husband. I loved Bewitched, because it was a show about a woman witch. Anyway, I hope you are familiar with the comedy. If you're not, the leading characters mother referred to her son- in -law as "Dagwood" instead of calling him by his real name, which was "Darrin." I loved it.

So, I decided to refer to my ex as "Dagwood," because I think it should be his new name- I thought about my "Dagwood" as I looked in the mirror at my "new" grays, feeling slivers of ice running through my veins. You see, it's Dagwoods fault that my hair is turning gray in my tender years. Oh, how I wish I could magically twinkle him into a little man and watch him go down the drain, swirling in a tiny tub tornado. But, the best part of this fantasy is the thought of him calling out to me in a tiny voice,


Actually, to be honest, I can’t wash any of the Dagwood's out of my hair, head, or heart.

I don't have dreams about past relationships often, or at least I don't believe I do, if I do, I don't recall them. Besides, whatever I dream at night sticks in a corner of my brain and blends into a daydream the following day. I wonder if there is a reason for that? Perhaps, I'm distancing myself, I'm not sure, all I know is that men are a pain in the behind and they give you gray hair.

In any event, I don’t think you ever get pass some loves, no matter how many times you flush them down the drain.. And sometimes more than one love may remain transfixed in your head, memories, and heart; it's just unfortunate that there are times when love has nothing to do with it.

In closing, I will admit to a present make up, break up relationship, a man I wash down the drain and out of my hair frequently, although he's trying to stick in my heart and torture my soul.
So, to be fair, I decided to give him an official nickname, "Driftwood." Yes, from now on, I will call the man I have twirling in the tub, "Driftwood."


Posted by aniceplaceinthesun.blogspot.com at 4:20 PM